I started thinking about expected goals (xG) recently after seeing this video shared by James Tippett on Twitter.

How much xG is accumulated in this ten second clip?pic.twitter.com/jqwPzfETOk

What are the odds of not scoring here? Five shots in the space of a few seconds, and you might expect any of the last four to find the back of the net more often than not. Imagine we had an expected goals model — a cautious one, maybe that takes the position of the goalkeeper and defenders into account — which assigned probabilities of each of these shots being scored as (and I’m pulling these figures out of thin air): 0.2, 0.3, 0.3, 0.3, and 0.3 xG. Would that mean that this sequence contains a total of 0.2 + 0.3 + 0.3 + 0.3 + 0.3 = 1.4 xG? Surely common sense suggests a single sequence can’t exceed 1 xG because it’s not possible to score more than 1 goal in any given attack?

If we take the formula for conditional probability:

We can simply rearrange it as:

We can visualise all our permutations using a simple decision tree. As scoring and missing are the only two possibilities at any branch, the probability of any shot missing must be 1 - xG. 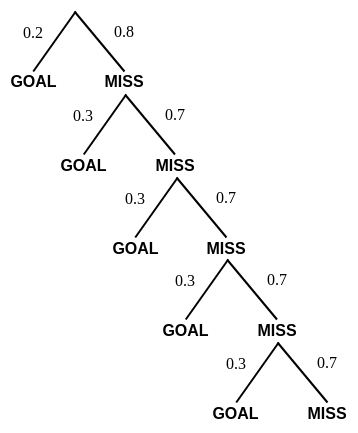 Next, let’s calculate the probability of each permutation by running through their mathematical notations.

Firstly, the unconditional probability of the first shot being scored is simply the xG of that shot:

Next, the intersection probability of the first shot missing and second shot being scored:

And so on for the third, fourth, and fifth shot being scored:

Finally, the intersection probability of all shots missing:

As a quick sanity check to make sure we’ve considered every possible outcome, we can add together the probability of all permutations and see that they sum to 1.

Now if we want to know the probabilty of a goal being scored in any of the above shots, we can sum the probabilities of each permutation containing a goal.

What we’re essentially asking is the probability of a goal being scored in the first shot or the second shot or the third shot … or the nth shot, which in mathematical notation is:

So there we have it: the odds of a goal being scored in this sequence (using our naive and probably conservative xG estimates) is around 81%.

Now we’ve got a methodology in mind, let’s use an example with real xG estimates. How about this goalmouth scramble from the Tunisia vs England game in the World Cup?

How many shots have we got here: one, two, three, or four? Maguire’s somewhat-fluffed header might have been an attempt at a shot or a squared ball, as might Alli’s have been. And does Sterling’s shot even count if it goes backward?

Luckily, StatsBomb have classified each shot and its xG for us already, and — even better — have made all their data freely available for World Cup 2018 (and other competitions, including the FA Women’s Super League). These xG values are unconditional probabilities which do not account for other shots in the same sequence, so it is possible for a single attack to have >1 xG; we may therefore wish to adjust xG using the method outlined above.

I’ll be using R with the StatsBombR package to access the StatsBomb API and the soccermatics package to visualise the data. First let’s get the data for the Tunisia v England game.

In order to plot our data with the soccermatics package, we need to transform the x,y-coordinates from StatsBomb’s arbitrary { x: 1 - 120, y: 1 - 80 } units to metre units – the pitch dimensions of the Volgograd Arena (where this game was played), 105m x 68m.

First let’s look at all the events in this particular sequence.

And then subset only England’s shots.

We can plot out the position of the players and trajectory of the shots using soccerPitchHalf() function (making sure to invert the x- and y-axes to account for the rotation and mirror across the pitch width to replicate the camera angle in the video clip). 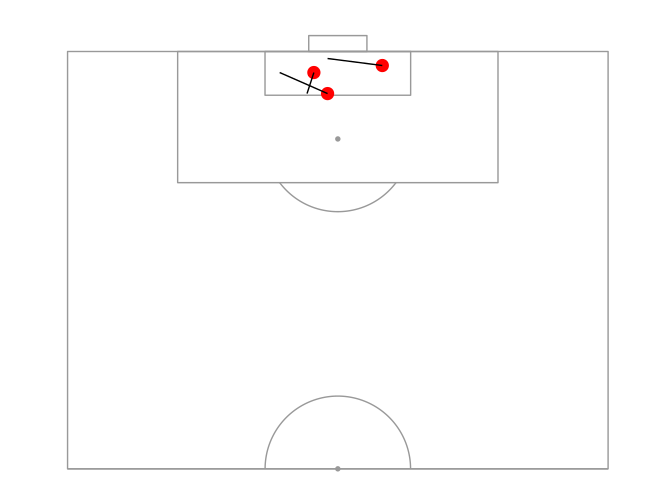 If we extract the xG of each shot, we can calculate the probabilities of each permutation of events as in our first example.

Or more simply, subtract the product of all xGs from 1:

Finally, not all shots in the sequence were created equal, so we don’t want the xG for each shot to just be 0.666722 / 3 = 0.2222407. We should therefore adjust the xG of each shot as a relative proportion of the total conditional probability.

The whole thing can be achieved in two lines like so:

This is the latest additions to the soccermatics functions which use xG. 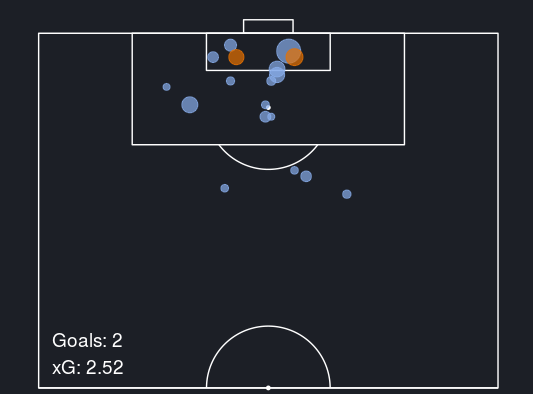 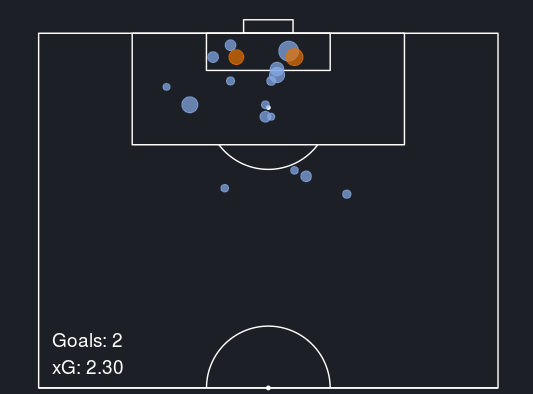 soccerxGTimeline can show the cumulative xG over the course of the game for both teams, either raw xG… 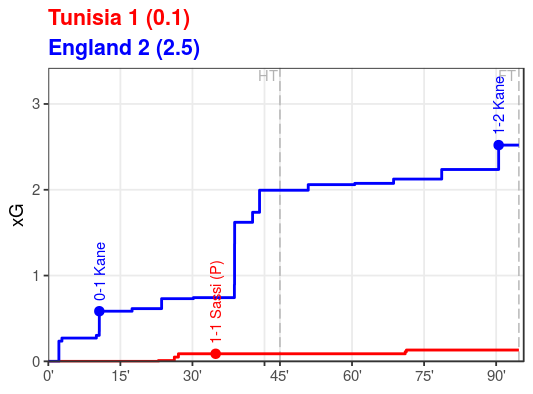 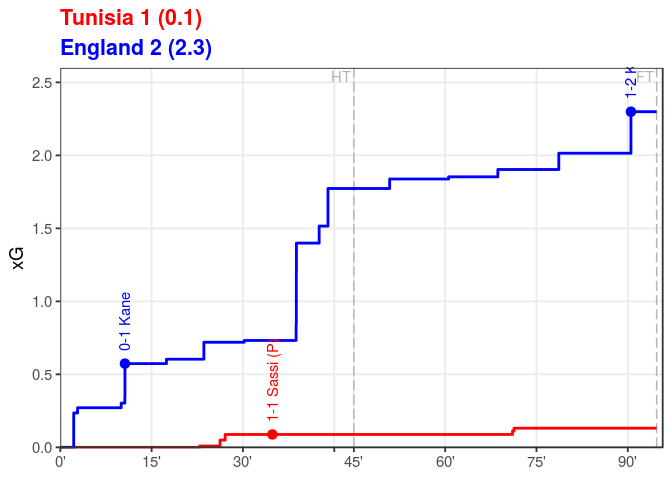